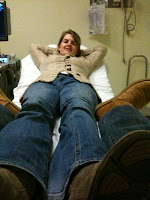 edars Sinai at 10am. I should say Crea arrived at 10am. While the hospital is amazing, the parking situation is not so amazing. It took several lots and 30 minutes before I gave up and parked at the Beverly Center and raced back. Shortly after I made it back to Crea we had to head to imaging for an ultrasound of the affected area. The picture at the right is Crea and I waiting for the docs to come for the ultrasound. This ultrasound was to look for the cancerous nodes and nodules and mark a path for the surgeon so he could more easily get to the cancerous area. One approach is to actually inject die in the node but, as it turns out, this was not the chosen path. The approach chosen was to simply mark the skin with X's indicated affected areas.

After a few minutes, the ultrasound was underway. I am not sure but it seemed like I was more nervous than Cre 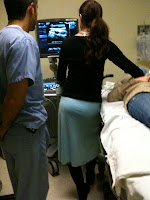 a. I am not sure why but I think it stems back to the loss of my daughter. I remember clearly sitting in the hospital while an ultrasound was performed searching for a heartbeat that was never found. Ever since that moment I have not been the biggest fan of the ultrasound. In this instance, however, the ultrasound was serving a great purpose. The doctor was able to find 5 Lymph nodes and/or nodules. One was in the thyroid bed itself and the others were to the right of the bed. One X marked the spot of th 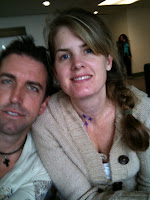 e nodule in the bed. Two X's marked the beginning and end to the area containing the other 4 nodules. Once we were done here we actually headed over to the waiting room where Crea would be admitted for surgery. I would say the mood was pleasant but tense. Crea is an incredibly strong person........I would say far stronger than I in certain capacities. If she was nervous........she certainly wasn't showing it. Just prior to Crea being called back for surgery we were able to take this next photo. I posted it online so you may have already seen it. You can see the X's that I refer to above. Looks like a tattoo gone bad but a very useful tattoo it was.

At this point, Crea was being prepared for surgery and I was in 'sit and wait' mode. The wait was to see her one last time before going under and to speak with the surgeon clarifying time expectations. While in reality, not much time had passed.......it felt like hours before I was told I could go back and see Crea. She was certainly ready for surgery...in her gown all set up for an IV... which helped bring the reality of everything to further clarity. Crea was still as calm as could be. The surgeon came in. He seemed calm and confident and that was very reassuring. He walked us through details of the procedure and told me that he hoped to be complete with surgery by 4pm and that, if he wasnt complete, he would send somebody out to provide me an update. At this point, it was time to say our 'See You Later's' which we did. I was then off to the Theater of Good News To Come.........which if you follow me on Twitter know is what I call the waiting room. Also if you follow me on Twitter, you know I was not in the theater long for I needed food. I headed to the cafeteria to take in some calories and more importantly kill some time to keep my brain from going on overload. I ate and tweeted. Everyone on Facebook and Twitter were AMAZING!! These guys talked to me all day and helped me get through some tough hours. I like to laugh my way through everything so I doubt my nerves showed in CyberSpace but truthfully, 4pm couldn't come soon enough for me. After food, I went back to the TOGNTC (the theater) where Crea's Mom arrived. I updated her with what I knew and how the day would play out and then sat to do some work. While half of me was offended I was working, the other half was thankful for something to take my mind off things. We were very near month end at work and I took some time to make sure everyone on my team was going to earn their bonus and, if not, figure a way how to get them there. Other than this, I dont remember too much except for some HORRIBLE coffee I drank in the theater. Once 3 o'clock rolled around, I just finished wipin' my car down.........sorry, Summertime by Will Smith just jumped into my head (yes I know it is 6 oclock in the song). Once 3 o'clock rolled around, I just finished .......Damn. I did it again. Okay, at 3pm, it was time to put down the work. I checked out FB and Twitter to kill some time but I was just waiting for the doc. I remember the theater was full of people. I have always said to remember people's names and to know their story. I wondered what stories were in this room. I had met a few folks and wished them all well. I could tell some stories were happy.......some sad.......same as the real world outside the hospital walls.
The clock strikes 3:45 and the surgeon shows up........early!!! I guess I could have assumed early was bad but I took this as a good sign. The surgeon said everything went great. The marks on Crea's neck aided tremendously. He was able to find everything.......although he did find a few more than the five........and he was able to do so without harming the vocal chords which was certainly a risk to the surgery. The other risk was harming a parathyroid gland and he felt confident that all was well related to this. We all have 4 parathyroid glands.........they produce Calcium. Crea had one harmed in her first bout with cancer so she is living with 3....which is fine. If another got harmed........she would still be okay but would be on some heavy doses of vitamins the rest of her life. I remember hopping on my iPhone to tweet the news. I believe I wrote "Cage Match Over - Cancer Beaten" or something similar. Within seconds, I had so many responses from FB and Twitter friends. The support was truly overwhelming. I appreciate you guys so much. Some are friends of many years and some are folks Crea and I have never met. Either way, Crea and I never felt alone through the process and to have everyone share the joy of the moment was incredible!
Anyway more t 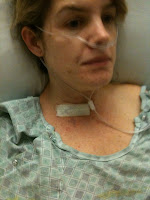 ime passed and then Crea's Mom and I were allowed back. Crea will kill me for posting this picture but this was what I walked into. It gets me a little upset even seeing it today. She was so out of it and in pain. Tough to watch when you can not really do too much to help. After some time here, Crea was moved to her own room (we were in post op here) to settle in for the evening. Once there and settled in.........I hate to admit it but I fell asleep for 2 hours while she remained awake. The release of stress from everything being over and having gone well made my eyes extremely heavy. To shorten the story from here, Crea was released the next day. She was very tired and very sore and spent most of her time resting..........and catching up with Lost Season 5 so we can watch the final season together. A week or so later she was back at the doc having her stitches removed. At this appointment we also received the news that 7 nodes/nodules had been removed. Of the seven, six were cancerous. The doc was very confident that he removed it all. This isn't to say it wont come back but the odds of a return keep decreasing as time goes by. Crea is technically considered in remission at this point.
So, that is our story. The next blog will have pictures from the party of people and s'mores. After that this blog will probably head a different direction but stay in the spirit of Good Plus One. I will focus more on running and my experiences with Team in Training, my beliefs that 26.2 miles can change your life and my belief that blessings come from even the worst of times. Until then, I hope to see you at the party!!!!
In case you are not at the party and want to make a donation, you can click on the link at the top left of this blog. If you would rather go directly to my fundraising page, the link to there is as follows: http://pages.teamintraining.org/los/lavatri10/4mywife
Posted by Christopher Wilno at 7:48 PM