Hope Next Exit Raffle - The Sequel 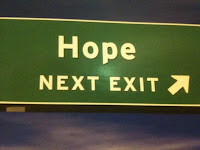 These were the words I told my wife and emailed to Lori Jomsky when the crazy eBay idea entered my head. A lot has transpired since I exclaimed these words two weeks ago. Along the way, my already high faith in people soared, my already certain belief that cancer will be cured solidified and, although I had a moment of lapse when eBay pulled my auction, my belief that blessings come from trying times was confirmed.

Over the years I have raised over $80,000 to help fight cancer. On that journey, not too many creative juices were required. Out of the gate, the circumstanc

es of my story were so current that people openly pulled out their checkbook. Lose a father, lose a daughter, watch your wife fight cancer while pregnant with your son……………..that tends to tug at the heart strings. All I did was share my story as openly and honestly as I could. I have done that ever since in the attempt to end cancer……in the attempt to show people a way to their abilities………in an attempt to maybe help a struggling soul along the way. That coupled with increasing endurance race distances coupled with perhaps a Super Bowl Pool or raffle here and there lead me to where I am today.

Jump to January 15, 2011. I had just watched Green Bay destroy the Atlanta Falcons while I sat in the living room wearing the first ever Atlanta Falcons hat I owned. I grew up in Atlanta (and Florida which is why I also cheer for the Dolphins) but in 44 years never owned a hat. After the loss, I had a Sixth Sense type of moment where I realized earlier in the year I broke down and bought a Boise State Broncos hat to watch them lose and end their run at a National title. I also broke down and bought an Oregon Ducks hat to sit in my living room and watch them lose the National title to Auburn. Three h

ats bought…..three big losses. I also flashed to my life as an Atlanta Braves fan where they have made it to the playoffs many times but have only won the World Series once. That one time……..when they clinched the World Series with a victory over Cleveland………..I was at a wedding unable to watch. Bad Karma? I have never thought of myself as bad luck but these facts rang in my head so I came up with the idea to auction off this bad Karma to either Pittsburgh or Green Bay as a fundraiser to help fight cancer. I can deal with my Bad Karma. I cannot deal with watching any more suffering that cancer brings to this world.

A few days after the launch of the auction, the Green Bay Gazette and the Pittsburgh Tribune reached out interested in the story. I wish I had a video of the shock that must have appeared on my face when news of this reached me. My silly idea was newsworthy. Next www.boringpittsburgh.com posted a great article on my story in the hopes that a Pittsburgh corporation would step in and make a difference. I loved that this article called out the city’s love of the Steelers and their love of charity. It almost made me want to root for Pittsburgh but then again, that could be a curse. News of my story made it to Chris Schauble (@ChrisNBCLA on Twitter) of NBC LA and, with no push from me, Chris presented my story to the station. Other than a high five at mile 26 of his 2010 Ironman Kona journey, Chris only knows me through Twitter but he jumped in to help. On Sunday, January 30th, Fred Roggin shared my story in his sports report and a few days later another 30 second spot of my story aired on the 6pm NBC LA news.

Unfortunately, the same night as this last NBC story aired eBay, for whatever reason, pulled my auction citing it was inappropriate. Inappropriate? I am just trying to raise money to fight cancer. The money is not even going to me. I am not funding my kid’s education. I am not trying to go on a vacation. I am trying to save lives. What was newsworthy and a human interes

t story was not okay for the auction site. To say I was angry was an understatement. In a few hours, the Pittsburgh Tribune article would run and now the link would not work. The ability for this auction to raise big money was over……or was it. Lori and Ray worked launch a new auction site, http://r.ebay.com/4NL34C , and, as I’m typing this post on a morning flight home, I am certain folks are fighting to get the old link posted again. I went to bed upset but thank God I only had 2 hours to sleep before waking up to fly back to Los Angeles.

I woke up with a different perspective. I stepped back and noticed the results that were right in front of my face. What started as a silly little idea turned into something much more. It started with a friend that took the time to turn my concept into reality. It started with Twitter where folks that have never met me in real life made the effort to share my story. It started with a good man that doubles as a news anchor who cared enough to fight on my behalf. It started with some newspapers that thought a funny story combined with human interest was worth a read. It all lead to 1,000’s of people learning about my journey……..not just the auction but the events that lead to the auction. It led to further promises fulfilled to my Dad and my wife and Isabella. It led

Thank you to all that made this happen this week. There are way too many of you to call out individually. You know who you are. Please know I am grateful. To NBC, and the Green Bay Gazette and BoringPittsburgh.com and the Pittsburgh Tribune……….thanks for your faith in me and my apologies for this eBay debacle.

I do not need to monitor the auction. This is already BIG regardless of what transpires on eBay.

Note: in the last 5 minutes my story has made its way to the Yahoo home page, MSNBC a

As a side note, if my story has inspired you, you can donate above and use my bad karma however you wish!

It is 8:40pm on Saturday and I wanted to type a brief update to the above post. The last day of the auction was a blur. After I posted the above entry, my story started appearing everywhere. I was getting texts, emails and IM's. The first arrived alerting me I was on the Yahoo Home Page. At work, vendors and customers were seeing my story and sending me the link. From there I received calls from the Leukemia and Lymphoma Society headquarters asking if they could submit my story to The Today Show.......nah, I will hold out for better........of course, you can submit my story to The Today Show. From there, Fox Sports, MSNBC, MSN, NFL team websites all were running my story. It was pretty amazing. I did make the mistake of reading some of the comments at the posts.....there are certainly some people who think everyone in the world is a con artist that clearly doubted my story was true to which I reply: I certainly wish it were untrue. It would be nice to sit down and watch the Super Bowl with my Dad and Isabella but we move on and make the most out of our losses. I really think the Thursday press craziness stemmed from the Wednesday night airing on NBC coupled with the Thursday morning publication of my story in the Pittsburgh Tribune. That created a wildfire of press that will surely be a proud moment for as long as my mind is capable of remembering. For when my mind fails to remember......here are some links to a few articles: Fox Sports Yahoo MSNBC Business Insider Boring Pittsburgh

The last update is that the high bid closed Thursday night at $1,625. I woke up excited. To be honest, I hoped it would raise more and that a corporation like Heinz or Alcoa from Pittsburgh would see the article and step in to help. I was still however very happy and proceeded to reach out to the high bidder J Shepherd of Arkansas. He was non responsive despite even Ebay reaching out to him. On to bidder 2 and ultimately bidder 3. Nothing. Apparently people thought is was funny to bid with no intent to donate which truthfully is a little hurtful given the personal nature of my story. Ultimately, I have to choose to believe that if all of these bids were fake, ultimately this was a great human interest story but not a great fundraiser. On that note, I just want to apologize and thank all of the press that helped not only promote my story but promote Team in Training, The Leukemia and Lymphoma Society and the entire mission to #beatcancer. I am grateful again to the Green Bay Gazette, Boring Pittsburgh, Pittsburgh Tribune, Lori Jomsky, Ray Montague, Michael Sally, Chris Schauble, specifically Karen at the Pitt Tribune for taking the time to get to know me and my story, all the sites that shared the press and all my real and Twitter friends for sharing in all the media excitement. I also want to thank David of @ebay who stepped in Thursday night to protect the auction from shutting down and for trying hard to get a bidder to contribute. It did not all work out at this moment in time financially for the cause but I am sure there are people that will join Team in Training or some fight against cancer because of seeing the article so, in the long term, Cancer is the loser here.

To close, I am going to be rooting for Green Bay and test out this whole Karma thing.......partially because the GB hat arrived first but largely due to the chance this whole Bad Karma thing is real. The Pittsburgh community embraced my story and I would hate for them to lose having me feel responsible. So.....we will see. Whoever wins......IT'S NOT MY FAULT....OR IS IT?

Posted by Christopher Wilno at 11:48 AM 5 comments: