I could not decide what to title this post.  It could have been one of a million things. The Little Things also came to mind but I have given myself 10 minutes to spew some thoughts onto a page so there is little time to waste worrying about the title. This post was inspired by today’s workout.  The workout itself is meaningless but for informational purposes it was a 50 mile bike followed by a 13.1 mile run off of the bike.  It was the things I noticed during the workout which were of importance.  They were reinforcements to why I love endurance sports and it was a personal reminder of all the things I try to teach.

My bike ride came first and I am not usually one to look around and take notice of my surroundings while working out but today everything seemed to be going in slow motion.  It was a HR1 workout, which I hit minus some steeper climbs.  I let myself stay in zone 1 without any regard for the pace……….truth be told I removed the pace completely from my watch to make sure I just chilled out.  What I noticed were a ton of people out walking and running and biking.  There were young kids.  There were old people like me (tough to admit this!) and there were folks probably greater than 80 out making it happen.  Some were fast.  Some were slow.  Some were barely moving but that is the beauty of what we do.  Running and biking means something to everyone with complete disregard for pace.  Endurance sports shows no bias.  Everyone can get out there and set a personal record.  Everyone can push farther today than they did yesterday.  Everyone can push through their struggles and injuries and doubts and get in the miles.  It is a beautiful thing.

Now to the run. I am a sappy dude. If you have followed any of my writings you are crystal clear on this fact.  Today was an emotional run for me.  It was amazing.  I have been dealing with foot pain. It has put some doubts in my head about how long I can continue to run long.  Today off the bike I had a 12 mile run.  I was sore tied to a 23 mile run yesterday and tied to the bike ride and, of course, this nagging foot pain.  The run was a zone 1 workout like the bike, which was a good thing as it was starting to get fairly warm.  I was not sure where I was going to head today and, for whatever reason, it took all I had to take that first step. I began running through the neighborhood near my house.  I can run switchbacks through this one section that lands me at 6 miles.  I did this as part of yesterdays run and I actually do it often when I do not feel like dealing with traffic. Out and back would get me to my 12 miles but I figured I would mix it up when I got to the 6 mile mark.  Little did I know one special needs adult would change my plan.  The picture below will show the switchbacks I ran. 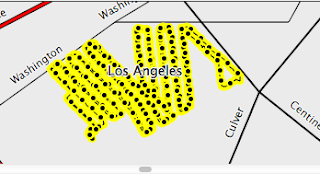 Running straight through the middle of these switchbacks is another road……it would be the one mile shortcut to my turnaround (i.e. I am never more than a mile from my house with this 12 mile run).  While I run a mile (basically an out and back), someone could just walk one block to get to the same place.  Anyway, early in the run, I noticed this guy standing on the corner of the block down this middle road.  He would rock back and forth a little bit tied to whatever condition he is dealing with. I would keep going to the end of the switchback, make my turn down the next road and there he would be waiting at the corner.  He looked like he was trying to act as if it was a coincidence every time but I decided to go a different direction.  Every time I got to him, I would wave and say ‘hey buddy’.  He would just give a shy smile and we would part ways for another mile.  I kept thinking this would stop soon and I was not sure how far he would get from his house…..was his comfort zone 2 blocks or 10 blocks.  I also had no idea how he knew what I was doing other than I run here all the time and have done so for years.  Maybe he noticed.  Anyway, I was tired.  My feet were sore but as long as this guy was going to make the effort to get to the next block, I was going to make the effort to run that next mile.  I hit the half way point and made my turn for home.  I was wondering if he would know to turn and go the other direction but I should not have had a doubt……..one mile later he was there…….’Hey buddy’.  I felt like a had a fan and I was not going to let this one down.  Amazingly I stayed in HR1 through mile 11.  It was then that I decided to pick it up a bit and extend my workout to hit 13.1 miles.  I saw him with about 2 miles to go and I told him…..”almost home”.  At mile 12 I told him ‘Last One. Thanks buddy. You saved me today’ to which he gave a huge smile. He also finally said something but I am not sure what it was.  13.1 miles off the bike in 1:51.  More importantly, I think I had a positive impact on someone’s day and life and I hope he knows he touched mine.  It was a simple moment but it spoke volumes.  I always tell people to ‘smile big’ when out pounding the pavement.  Obviously in the middle of a tough workout that is difficult but the point is that folks are watching you.  There are folks sitting on the couch that want to get up and make a change.  There are people overweight that want to know there is a better way.  There are kids that wish they could be out running but instead have to live through those of us that can.  Smile big because when you are out on the streets you are making a difference and have the ability to impact lives.  It doesn’t matter if you are fast or slow, tall or short, skinny or overweight…….people are watching.

“Remember there's no such thing as a small act of kindness. Every act creates a ripple with no logical end.” Scott Adams

My 10 minutes are up.  This was not as coherent as I would have liked but hopefully a little of my point snuck it’s way into the post.  Thanks for reading. Now get out there and make a difference.
Posted by Christopher Wilno at 2:27 PM