Cancer Is Losing the Battle

November 6th was the day my wife, Crea, would run her first marathon at the Santa Barbara International Marathon. This was a big day for my family. The story that lead me back to running and to Team in Training and to charity and to endurance sports is long but for this day, it was all tied to Crea battling cancer twice...............and on both occasions winning the battle. Marathon Day is always a big day but this one held some special meaning. I had 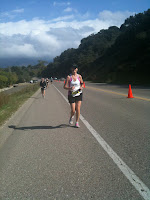 built Crea's training plan.....she stuck to it perfectly. It was not designed for a BQ. It was designed to keep Crea healthy and get her across the finish line. Crea had trained on her own and, consistent with what I preach, she wanted to run the first 15-20 miles on her own so I was going to run about that far.....stop.....and wait for my wife. The plan was set, the day arrived but quickly things unraveled. My 2 year old was very sick......so sick we decided that I would not start this race but instead take Thalia to the ER. The 3 of us hopped in the car and headed to the finish line of the race where I would drop Crea off to be bussed to the start of this point to point race. After this drop off, I was fairly sure I would not only miss the start of the race but also the finish. The fact that Thalia was so ill, combined with a mess of closed roads and the fact that I had spent the entire week barely able to walk did not bode well for me physically being any part of this race. To say I was sad would be a tremendous understatement but our baby needed one of us and Crea needed to do this race. After dropping off Crea, the rest of the day was a lesson for me......of things I need to learn, reminders of things I had learned and since forgotten and an exclamation point on why I do what I do. The topics are simple but the day was profound.
For the lessons to make sense I will give some quick bullets as to how the day went from the time I dropped of Crea.
That is the day. Now to the lessons:
Go With The Flow

I am certainly capable of being spontaneous..........like in college when I would spontaneously end up at a club instead of studying for a midterm.......but for big events, I can get thrown off when things dont go according to plan. Today would teach me differently. The day certainly did not start as planned but ended up being more than I could have ever scripted. November 6th could have solely consisted of the marathon which would have been amazing. Instead it included some quality time with both of my girls, Crea and Thalia. I was able to be a good Dad and take care of my baby while still being able to be with my wife for the last 6.2 miles of her marathon. I was able to hang out with Crea's Dad........someone who actually means a lot to me....and her entire family. If you go back and read the post for Isabella's Day and read the speech I gave at her Memorial Service, I talk of family and realizing through hardship that Crea's family was my own. For whatever reason over the years to follow I let that realization go blurry but today helped bring it back into focus. After my Dad passed away, Chuck stepped in and was like a father to me. I vow to never lose sight of this again and am grateful for the reminder. I mentioned at mile 23 getting to spend some time with Tiana. She is my oldest daughter (19)....technically my step daughter....but we have been together since she was 5. I try to live life without regrets but if I were to allow myself one, it would be to go back to when she was 5 and be a better Dad. I went from a bachelor living alone in a 3 bedroom condo to having a child and I had no idea what I was doing. Over the years, we have not been as close as I would like due to many circumstances but I do Love her very much. To share a mile with her today meant more to me than she probably knows. I guess if you really get in and dissect this day, it is support for my biggest belief......that blessings come from every situation. There was a very long build up to this day. It did not start out so well but so many amazing things resulted from the turn of events.

Time Does Not Always Matter

I said it above but will repeat it here. I have no idea what the clock read when Crea crossed the finish line. I have not gone back to see what the time was. I do not know what the stats were....where she ranked among females and in her age group. There are times when these details are important.....there are times when they are not. Today was about overcoming a lot of obstacles. Today was about winning because you were able to toe the start line. A wise man, Colin Cooley (@runwicked) always says he cares more about the story than the time. Today's story read, Crea Wilno Beats Cancer Twice and Returns To Show That 26.2 Miles Are No Match For Her. (Please don't get me wrong here.....Crea did great. She is a great athlete and if she decides to run another race and time is important, she will crush it!)

Cancer is Losing the Battle

Cancer knocked on my Dad's door. Cancer won that battle. While winning the battle, it dragged me into the war. That was a big mistake on the part of cancer.....one I am sure it regrets. Along the way, Cancer has won many other battles and, in doing so, has brought a lot of people like me into the battle to end the horrible disease.

Cancer knocked on my wife's door twice. Twice! Two cage matches between my wife and the disease who should not be named (yes I am a Harry Potter fan). Crea's current record is 2-0. During the tenure of her battles, I have raised $80,000 in the fight against cancer. I have been on teams with Team in Training.......as a participant, mentor or coach that have collectively raised millions. Other organizations like the American Cancer Society's DetermiNation are seeing similar results.......people raising a lot of money in an all out war and race to find a cure. Watching my wife out on the streets of Santa Barbara wearing a huge smile reminded me that cancer is losing it's grip. It is losing the battle. We are closer to a cure today than we were 10 years ago. Gleevac was the last miracle drug.........what will the next one be. It is out there. Do you hear it coming cancer? Be scared. You will go down and I will be there to join in the celebration when you have gasped your last breath.

Thanks for reading. I am incapable of being short winded. If you would like to join me in the battle against cancer by making a donation, there is a link to my fundraising site at the top of this page. If you would prefer to help in other ways, you can sign up for Team in Training. If you live in So Cal you can come spend 18 weeks being coached by me for the Summer 2011 season. I have also mentioned ACS DetermiNation.....another great organization. If you want more information on them you can reach out to David Pittman (@DP_Turtle) on Twitter. Thanks again for your time!!

Posted by Christopher Wilno at 9:18 PM